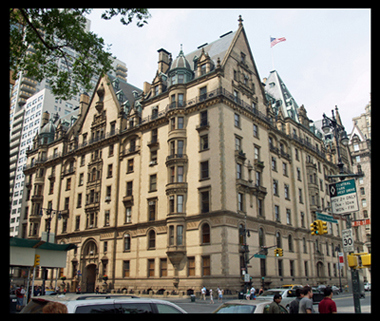 Although it’s been 32 years since the assassination of John Lennon, his legacy lives on. On December 8th, thousands will visit the Strawberry Fields memorial in New York’s Central Park to pay tribute to the life of the British Rock icon who changed music history. Reflecting on his career and the tragedy of this day in history, fans will look across, or even make the short trek to W. 72nd street to see The Dakota: the building where John Lennon lived, worked, and died.

returning home from a recording studio with Yoko, he was shot and killed by Mark David Chapman at the entrance to the building. John Lennon’s murder prompted an unprecedented outpouring of grief from around the world and The Dakota became sacred ground.

To this day, Yoko Ono lights a single candle in the window on the anniversary of his death to remind the world that his memory still burns bright.

Built in 1884, The Dakota is a North German Renaissance styled, co-op apartment building in the Upper West Side of Manhattan. The original owner, Edward Clark, head of the Singer Sewing Machine Company, named the Building after the Dakota Territory because that part of Manhattan was so unsettled. In addition to John Lennon and Yoko Ono, these apartments have been a home to many famous people including: Lauren Bacall, Rosemary Clooney, Judy Garland, and Maury Povich.

Since his murder, thousands of people of all ages flocked to 1 West 72nd Street to see this historic landmark. However, fans and tourists are not the only ones known to flock to the building. In 1991, it became apparent that pest birds had found a nesting place up in the high arches. In order to maintain the integrity of this historic building, the Board of Directors called BirdMaster‘s team of bird control experts to rid The Dakota of birds in a safe and humane way.

BirdMaster installed PermaNet®, a custom-fitted bird control netting system, to protect the arched passageway from pigeons. The high archway connects the West 73rd Street entrance with the inner courtyard. Although virtually invisible from the ground, the netting is still there today and in great condition. This maintenance free bird exclusion system prevents birds of all sizes from venturing into the arch openings to nest and instead sends them on their way. Now, 21 years later, the building is free of bird infestations and the damaging effects of bird guano.