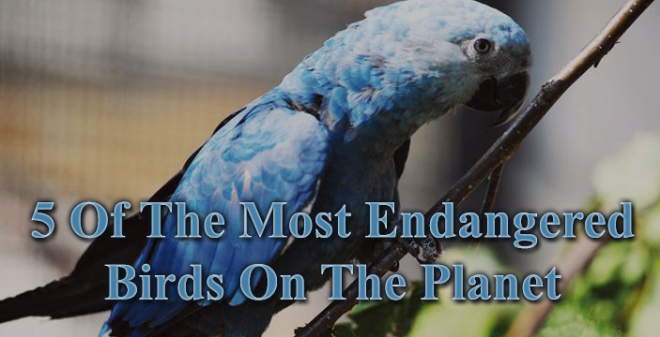 anopsitta spixii), also known as the Little Blue Macaw, is a Brazilian macaw and the only small blue macaw. It is a member of Arini tribe in the subfamily Arinae (Neotropical parrots), part of the family Psittacidae (the true parrots). It was first described by German naturalist Georg Marcgrave, when he was working in the State of Pernambuco, Brazil in 1638 and it is named for German naturalist Johann Baptist von Spix, who collected a specimen in 1819 on the bank of the Rio São Francisco in northeast Bahia in Brazil.

The Hawaiian Crow or ʻAlalā (Corvus hawaiiensis) is a species of bird in the crow family, Corvidae. It is about the size of the Carrion Crow at48–50 centimeters (19–20 in) in length, but with more rounded wings and a much thicker bill. It has soft, brownish-black plumage and long, bristly throat feathers; the feet, legs and bill are black. SomeNative Hawaiians consider the Hawaiian Crow an ʻaumakua (family god).

The Kakapo, also called owl parrot, is a species of large, flightless, nocturnal, ground dwelling parrots of the super-family Strigopoidea endemic to New Zealand. It has finely blotched yellow-green plumage, a distinct facial disc of sensory, vibrissa-like feathers, a large grey beak, short legs, large feet, and wings and a tail of relatively short length. It is also possibly one of the world’s longest-living birds. Like many other New Zealand bird species, the Kakapo was historicallyimportant to the Māori, the indigenous people of New Zealand, appearing in many of their traditional legends and folklore.

The Brazilian Merganser, Mergus octosetaceus, is a duck in the typical merganser genus. It is one of the six most threatened waterfowlin the world with possibly fewer than 250 birds in the wild and none kept in captivity. The origin of its name is from its long, sharp-edged beak that has a great number of teeth-looking edges.

The California Condor (Gymnogyps californianus) is a New World vulture, the largest North American land bird. This condor became extinct in the wild in 1987 (all remaining wild individuals were captured) but has been reintroduced to northern Arizona and southern Utah (including the Grand Canyon area and Zion National Park), coastal mountains of central and southern California, and northern Baja California. Although other fossil members are known, it is the only surviving member of the genus Gymnogyps.