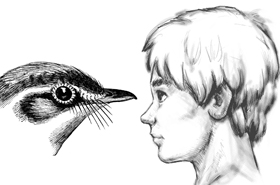 Researchers from Imperial College London found that bird brains are quite similar to human brains. They’ve developed a map of the pigeon brain and compared it with other mammals (such as humans). This may suggest that human brains are wired similarly to other animals capable of high-level cognition. Birds are capable of complex social reasoning, have an ability to solve problems and some can even craft and use tools.

Professor Murray Shanahan, who authored the study from the Department of Computing at Imperial College London, went on to explain that birds evolved separately from mammals for about 300 million years and that by comparing human brains with other kinds of animals that behave intelligently, we can discover the way the brain works in finer detail.

Researchers created the map by analyzing 34 brain anatomy studies of pigeons. They focused on hub nodes which are parts of the brain that are centers for processing information and that allow for high level cognition.

Looking at the Hippocampus, which is important for navigation and long-term memory in birds and mammals, they found that these hub nodes have connections to other parts of the brain in both animals. This could mean that the brains function in a similar way. They also compared the prefrontal cortex in mammals, which controls complex thought like decision making, with the nidopallium caudolaterale, which functions similarly in birds. These two nodes evolved differently but were found to be connected in a similar fashion.

They intend to use this new information to build computer models that function in the same way as an animal brain which could be used to control robots. This study can be found in the Frontiers in Computational Neuroscience journal.