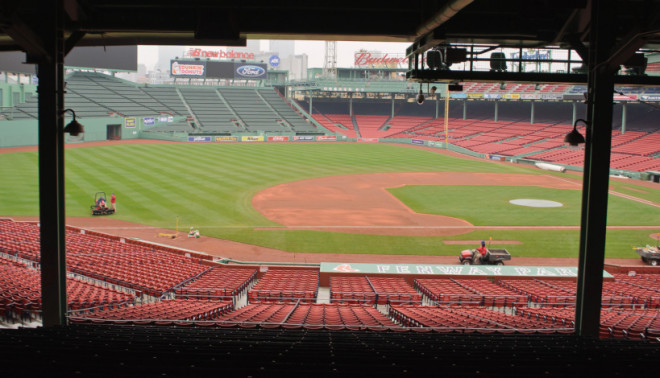 Regardless of your baseball allegiances and even if you aren’t a fan of the sport at all, Fenway Park is one of the most historic sports landmarks still in use today. It is the oldest major league ballpark still holding games in the country and has been the home of the Boston Red Sox since its opening in 1912. You may know all the history about the Red Sox as a team, but how much do you know about their home? Here’s a little history lesson on the architecture and structure of one of America’s most beloved ballparks.

Fenway Park was originally designed by James McLaughlin at the request of John I. Taylor, then owner of the Red Sox, and began construction in September 1911. There is much speculation as to where Fenway Park actually got its name – Taylor claimed it came from the park’s location in the filled-marshland or “fens” area of Boston known as the Fenway neighborhood, though one cannot dismiss the fact that Taylor’s family owned the Fenway Realty Company. The park took a year to complete and the first game was played on April 20, 1912. Unfortunately, coverage of the game was overshadowed by the Titanic sinking just a few days earlier. On January 5, 1934, a major fire broke out and destroyed much of the Fenway Park construction, however when it reopened on April 17, the park had been restored and was free of damage.

There have been several renovations, expansions and changes to Fenway Park in its history, leading to a variety of unique architectural elements and features, including:

With all the distinct characteristics and architectural nuances that form the structure of Fenway Park, the potential for pest bird infestation is a major concern. Native red-tailed hawks have done a great job of ridding the park of unwanted birds. Hawks and similar predators are a wonderful form of green pest control, but it is very rare to find predators that naturally stay around the area that the pest control is needed. Luckily for Fenway Park, the red-tailed hawks have been staying around for years, preying on pest birds whose droppings threaten the park and patrons during game time. Pigeons love to nest inside the various nooks and crannies created by the overhead canopies through the years. However, after having recently installed a suspended ceiling over the prime seating area behind home plate, small openings were left around the canopy beams. The problem? Pigeons can fit through and fly into these openings to nest while the red-tailed hawks are too large and cannot get to them to scare them away.

BirdMaster was asked to come in and tackle the issue to keep pigeons out of these openings and return the pest control to the red-tailed hawks. BirdMaster’s team of bird control experts installed PermaMesh, a custom-fitted stainless steel mesh bird control system. This zero maintenance bird exclusion system prevents birds of all sizes from venturing into the openings to nest and instead sends them on their way. BirdMaster successfully turned the pest control reins back over to the red-tailed hawks who have shown that Fenway Park not only has a Green Monster but also green pest bird control, It’s a win-win for the Sox and the hawks.