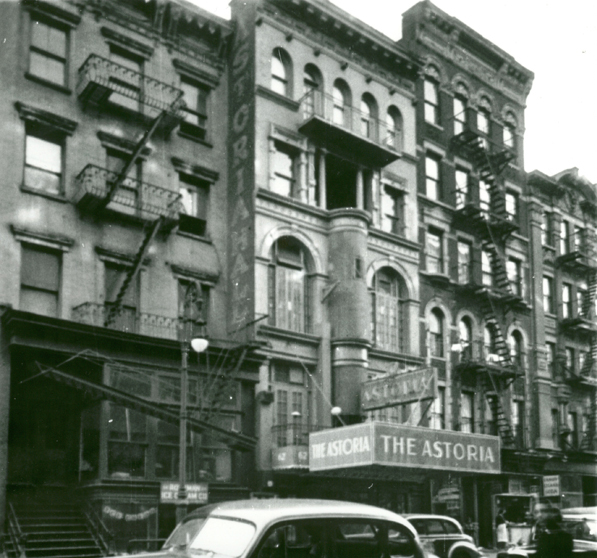 The streets of New York are full of rich history and beautiful architecture from various time periods. One of the best representations of New York’s architectural ancestry can be seen in the theater and art districts, doing their part to restore and preserve historic buildings and landmarks to cherish for years to come. On what is known as the Fourth Arts Block on East Fourth Street in Manhattan, the Duo Multicultural Arts Center has been undergoing a $1.5 million dollar restoration of the façade to revive the beautiful aesthetics this 1800s hotel and theater once held.

The Duo Multicultural Arts Center began as a hotel in 1889 and was later transitioned into a German music union known as Astoria Hall. In the 1930s, the ballroom was converted into a theater (named Fortune Theater), providing ample place for concerts, play productions and more. John Philip Sousa helped organize the first music union in New York and held several meetings in the theater, and several Yiddish theater companies utilized the space for their productions as well. At one point, the theater was even home to a television studio in which several early TV shows were filmed. Andy Warhol, renowned pop art pioneer, set his eyes on Fortune Theater and rented it in the 1970s to showcase his own theatrical productions. Acclaimed director Francis Ford Coppola also rented Fortune Theater to shoot the famous operetta scene from the American epic crime film The Godfather Part II. The Duo Multicultural Arts Center both moved into and began producing in the building in 1987. Also housed inside the five-story building is the Rod Rodgers Dance Company.

Duo Multicultural Arts Center Restoration project before and after

Over the years, the exterior of the building has taken quite a hit to its beautiful aesthetics, hiding the beauty of its façade to any and all passing by. While internal renovations have been a continual project, a $1.5 million dollar restoration project was commissioned in 2011 to return the façade to its former glory – and to revive the history the building holds to passersby. As you can see, the restoration was a marvelous success and the preservation and restoration specialists did a beautiful job. BirdMaster was honored to contribute to the restoration project by bird proofing the exterior of the building to deter pest birds and their droppings in the future. For the Duo Multicultural Arts Center, BirdMaster installed PermaNet Lite, a type of bird netting designed to blend in with a building’s exterior and be virtually invisible to the naked eye, and VolTape, an energized anti-roosting system with ultimate flexibility. All of BirdMaster’s bird proofing systems are humane and cause no harm to pest birds, but rather send them on their way safely.

On April 25, 2012, BirdMaster received the Lucy G. Moses Preservation Award from The New York Landmarks Conservancy for their work on the Duo Multicultural Arts Center. The new bird control system will provide low maintenance pest bird control and protection for the building for years to come.