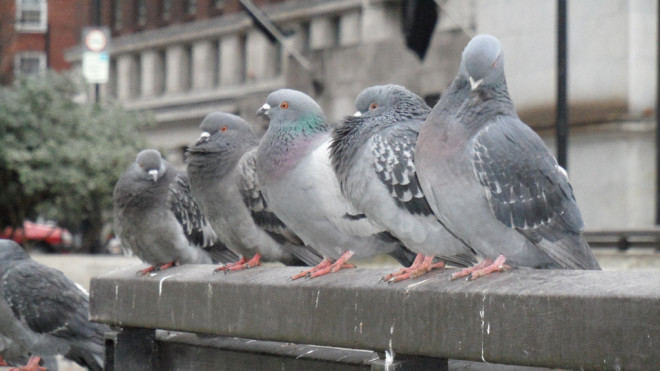 A large, growing group of pigeons have infested Washington County and are causing officials to worry about the health and well-being of its population. Before the population and visitors get sick from bird droppings, the town is brainstorming ways to fix the pigeon infestation without harming birds or the environment.

Since the old Washington County Tennessee courthouse in Jonesborough was taken over by pest birds, the accumulation of bird droppings on its exterior has caused a significant mess to its façade.

‘They’ve been a problem for years, but it’s worse this year than it’s ever been,’ said Hensley.

‘We have to keep the porches and ramps washed off so people don’t have to walk through,’ said Hensley. ‘They need to get rid of them.’

The county is coming up with a plan to eliminate the problem. Some will likely be trapped and killed. The county will also remove the windows so the birds can’t roost there. But first, leaders will install sharp bird control strips on all flat surfaces.

They know they won’t be able to get rid of all of the animals, but they say it’s time to do something.

‘If this keeps on, somebody’s going to get sick,’ said Hensley.

As know, the buildup of bird dropping can cause structures to deteriorate over time. As well, the cost to clean the mess left behind by pigeons can surpass the cost involved in the installation of humane bird control systems.
BirdMaster Bird Control Systems specializes in humane and environmentally friendly bird deterrent systems. They have been protecting historic and commercial buildings for over 20 years. BirdMaster protects buildings from the damaging effects as well as the health hazards associated with bird guano. Their systems do not harm bird or the environment.