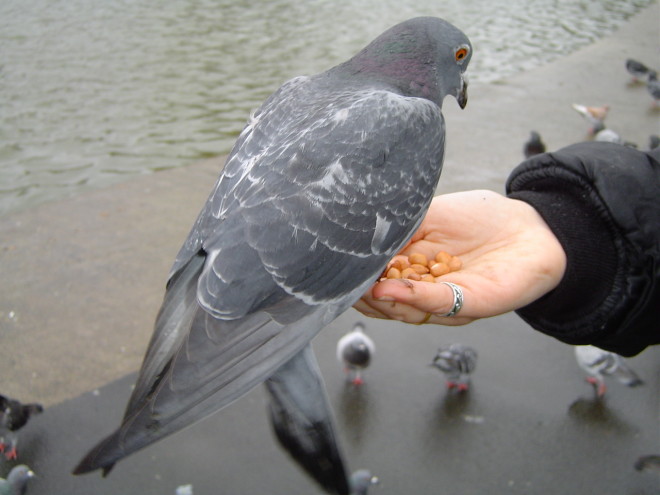 This year, in early January, a young New Brunswick woman contracted a potentially fatal condition known as Cryptococcal Meningitis. This is a serious fungal disease carried in the feces of pigeons, easily transmitted to humans simply by coming into contact with pigeon droppings.

“The debilitating illness attacks the spine and the brain, causing severe swelling. It left her confined to a hospital bed in a state of delirium for weeks.

But the most devastating consequence of the sickness is that Richards is now blind.

‘Be aware of this disease. It could kill a child in a heartbeat,’ Richards said from her hospital bed.

‘It could kill a senior in a heartbeat without you even having to worry about the symptoms. It comes on that fast. If you don’t realize the symptoms, it could kill you, too.’

Richards’ warning comes on the heels of Fredericton city council’s approval earlier this month of a recommendation it toughen its animal-control bylaw to make it illegal to feed pigeons.

While such complaints are unusual, a problem exists on the city’s Grandame Street with a property owner who refuses to stop feeding the birds. The pigeons are roosting on roofs and defecating.

The new law will give the city’s bylaw enforcement officers the power to ticket and fine offenders.

‘Please don’t feed the pigeons,’ Richards said. ‘Try to shoo them away, if you see them. It (the disease) is horrible. The pain that you get from this disease is crippling.’

‘The after-effects are with you for life and you just can’t stop thinking about it. I just want other people to know and try to stay away from pigeons.’

Oddly enough, Richards said she has no recollection of ever being anywhere near pigeons.

‘I am still wondering to this day where I got it. I could have stepped in it and brought it into the home. I just don’t know.’

Richards said the symptoms started with a migraine headache -one that wouldn’t go away. She was admitted to hospital Feb. 10 after many days of intense head pain. Shortly after, she went into a comalike state.

‘When I woke up I thought I had a mask over my eyes, but I was wrong. I was blind. I was recently told that I will be blind for the rest of my life. This is a tough thing for a 23-year-old to go through. My world crumbled around me.’

Richards said the odds of surviving the disease are 50-50.”